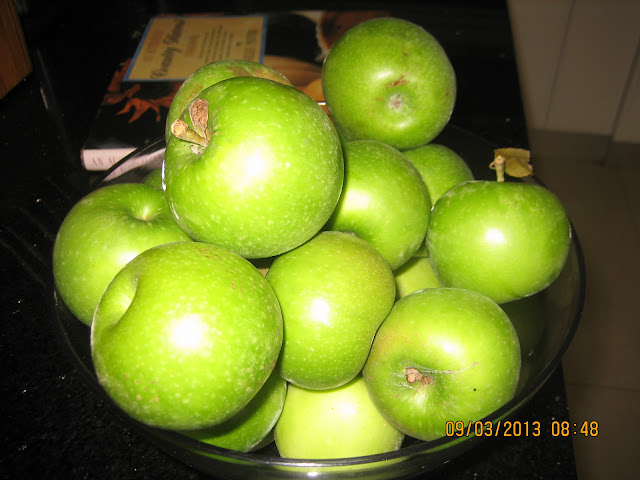 With summer warmth comes the arrival of apples.  I always thought apples were a cold climate fruit as Tasmania is called 'The Apple Isle' and apple trees are not prevalent in the mid north coast of New South Wales.
MOH (My Other Half) protected the green Granny Smith and the dwarf Pinkabelle tree from invading apple eaters.  Late last year we were so excited to see the Royal Gala and Golden Dorset apple trees growing side by side bloom firstly with gorgeous pink/white blossoms which were then replaced with small apples that slowly but surely grew to be gorgeous, edible apples.

These apples were close to being harvested in late November when we went away for a few days.
On our return we were devastated to see the apples had been seriously culled, some hanging half eaten off the trees.  Thinking they were birds, MOH netted the tree and that evening, just after dark, you could hear creatures settling on the tree and getting trapped in the net.  They were flying foxes!  Much like a bat, there were 5 flying foxes caught in the net and the night was still young.  Needless to say it was not easy disentangling these hapless creatures and we realised we would not be eating any of those apples.

Thus when the other two apple trees, the Granny Smith and Pinkabelle (which is basically a dwarf Pink Lady tree) were slowly ripening, MOH constructed a PVC plastic pipe structure and netted it on the sides so it could be moved from one fruit laden tree to another.  Very creative and we managed to harvest 6kg of apples which was brilliant considering the trees have been in the ground 1 -2 years and this was their first fruiting. 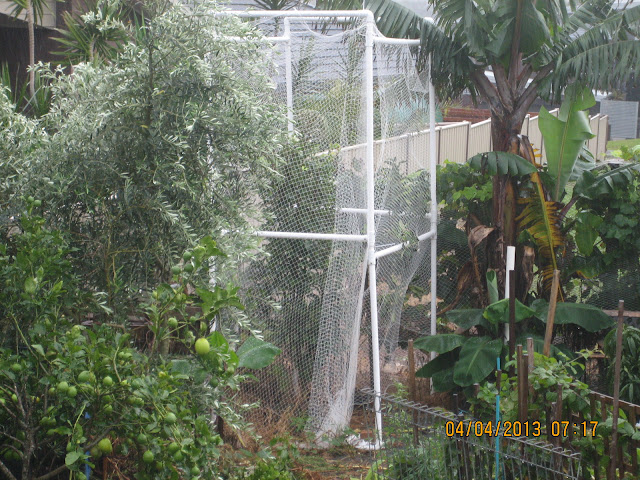 We have had apple pie, apple danish, apple crumble, bakewell tart, apple sauce, and fresh apples but there was still some remaining so my thoughts turned to jam. 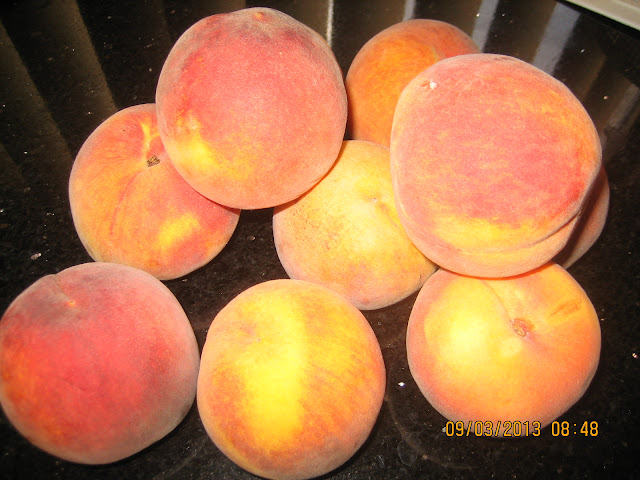 I had previously made fig and apple jam at Christmas so this time decided on purchasing some beautifully big, juicy yellow peaches to combine with the apples.

Firstly I measured 1.8kg green apples, washed them which was probably not necessary as using the clever apple slinky the apples are simultaneously cored and peeled in one movement.  I know there were no pesticides used in the manufacture of these apples, but washing fruit is purely a learned habit.  Then they were chopped to a small 'suitable for jam' size. 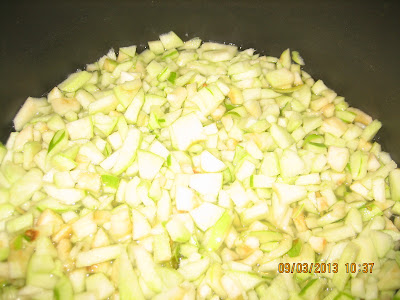 The gorgeous peaches were plunged into boiling water for one minute then refreshed in cold water to enable the skins to be peeled easily.   Then the peach stones were removed but reserved for special use. 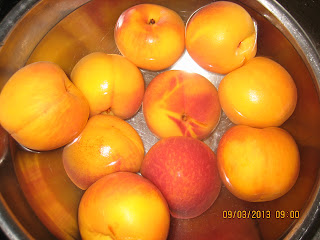 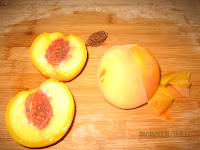 The peaches were similarly chopped to the same size as the apples. 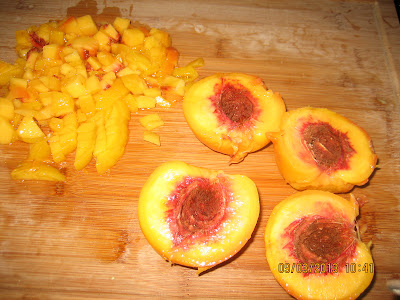 The chopped apples were simmered alone initially prior to adding the chopped peaches and lemon juice. 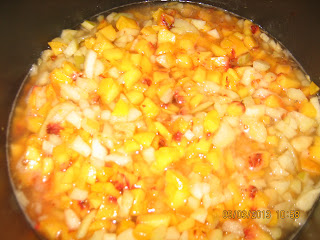 I placed the apple cores and peach stones into a square of muslin, then tied the ends together and hung this into the chopped apples.  There is pectin in the cores/seeds which helps the jam to 'set'. 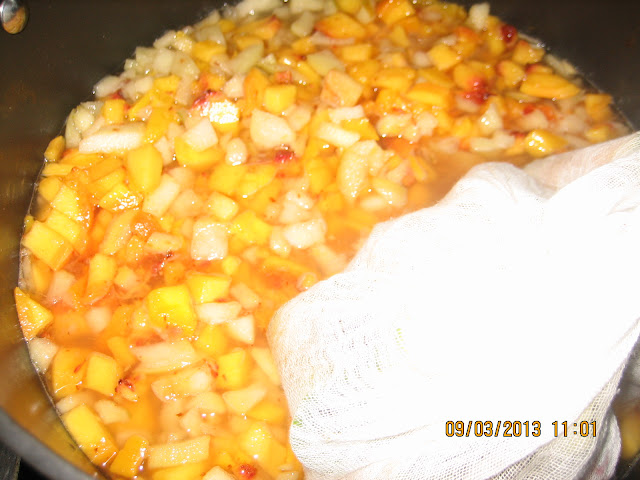 Removing the muslin bag before adding the sugar. 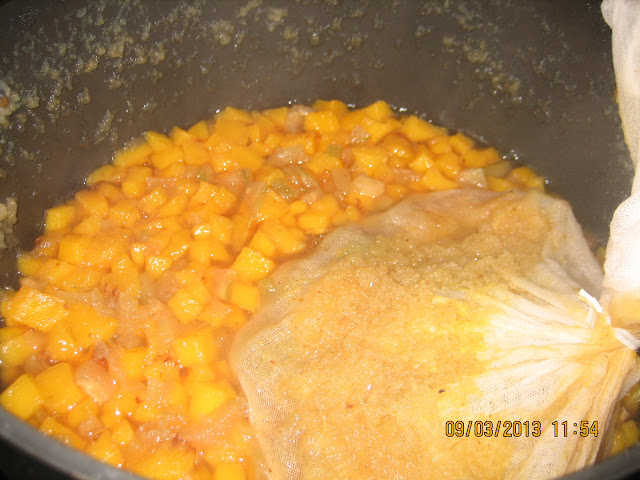 Simmering away with the sugar added to the jam.  After the sugar is dissolved, don't stir the jam again. 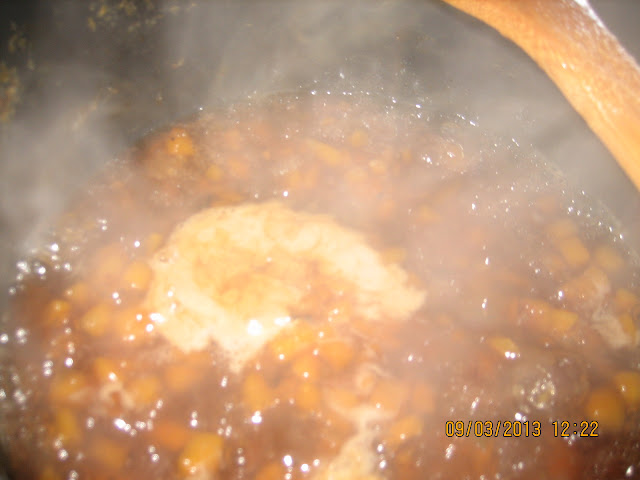 Place chopped apples and water in a large saucepan, bring to boil, reduce heat to simmer and allow the tied muslin bag with the apple cores and peach seeds to nestle in the fruit, then simmer covered for 10 minutes. Add the chopped peaches and lemon juice, then simmer for approximately 20 minutes, or until the fruit is soft.    Remove the muslin bag, squeeze to remove any liquid and discard.
At this stage it is suggested by many jam makers, including my mother, that you measure the jam and add 3/4 cup of sugar for each full cup of jam.    I find this an unnecessary step and as we don't like our jam too sweet I added 1.2kg white sugar which was just perfect.  Sugar can be added to taste.
Boil uncovered for a further 10 minutes, do not stir after the sugar has dissolved.  Jam is ready when a little placed on a saucer that has been in the freezer 'sets', that is, forms wrinkles when pushed with your finger.
Pour hot jam into hot sterilised jars and seal while hot.

This jam will last for a long time, about two years, but I suspect strongly that the family will eat all the jars before we can do a time test.
Buon appetito! 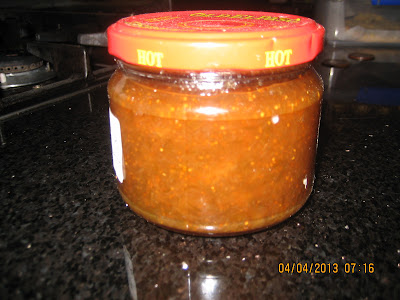 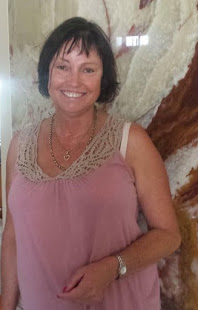